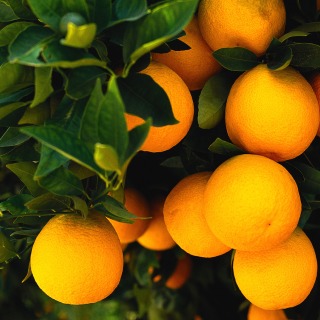 The Valencia orange is a sweet orange first hybridized by California pioneer agronomist and land developer William Wolfskill, on his farm in Santa Ana in southern California in the United States. Its name comes from the city of Valencia, Spain, known through history for its sweet orange trees, originally from India. The patented orange hybrid was later sold by William Wolfskill to the Irvine Ranch owners, who would plant nearly half of their lands to its cultivation. The success of this crop in Southern California led to the naming of Valencia, California.

Primarily grown for processing and orange juice production, Valencia oranges have seeds, varying in number from zero to seven per fruit. However, its excellent taste and internal color make it desirable for the fresh markets, too. The fruit has an average diameter of 2.7 to 3 inches (70 – 76 mm). After bloom, it usually carries two crops on the tree, the old and the new. The commercial harvest season in Florida runs from March to June. Worldwide, Valencia oranges are prized as the only variety of orange in season during summer.