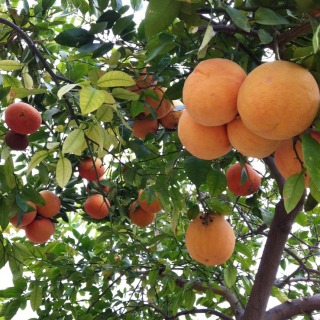 The 1929 Ruby Red patent was associated with real commercial success, which
came after the discovery of a red grapefruit growing on a pink variety. Only
with the introduction of the Ruby Red did the grapefruit transform into a real
agricultural success. The Red grapefruit, starting with the Ruby Red, has even
become a symbolic fruit of Texas,
where white "inferior" grapefruit were eliminated and only red
grapefruit were grown for decades. Using radiation to trigger mutations, new
varieties were developed to retain the red tones which typically faded to pink,
the Rio Red variety is the current (2007) Texas grapefruit with registered
trademarks Rio Star and Ruby-Sweet, also sometimes promoted as
"Reddest" and "Texas Choice".