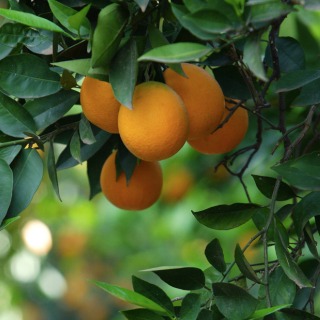 Midnights are of an unknown origin, but this variety was first noticed as a slightly earlier maturing tree growing in a valencia orchard the eastern province of south africa in the 1920's.
midknight yields a significantly larger fruit than valencias, has a better flavour, and is virtually seedless. it matures two to four weeks earlier, and the fruit has a very high juice percentage and very good flavour. it is, however, more difficult to peel than a valencia because the rind is thinner and more tightly adhering, and often oily. in fact, when grown in hot, humid climatic conditions it becomes almost impossible to peel. in south africa it is harvested from the end of june to the end of october.In south africa it is harvested from the end of may to the end of july.